Import the highest quality fruits and vegetables to meet and encourage healthy eating habits amongst our generation and the future ones.

More than 22 years ago, Chenail | Import-Export took root in the fruit and vegetable industry. Created in 1993 by Mr. François Chenail and managed by his son, Jean-François Chenail (President and CEO), Chenail | Import-Export is now viewed as one of Canada’s leading companies specialized in the importation, storage and distribution of fruits and vegetables.

In 1993, the company employed only 10 people. This small core team expanded over time and now includes more than 75 employees. The human approach promoted within the company aims at maintaining the family atmosphere. It is based on mutual respect and close attention to the needs of our employees. Our entire team is therefore highly sensitive to the importance of meeting our customer’s requirements and complying with the food hygiene and safety rules.

In its early days, the company generated revenues of less than $5 million. However, with hard work, commitment and dedication, 20 years later, Chenail | Import-Export has over 500 independent customers and achieves more than $120 million in annual sales.

Given this rapid growth, Chenail | Import-Export decided to renovate its 145,000 square feet warehouse, in accordance to the provisions regarding food safety of the federal and provincial building codes. The project was completed in April, 2013. Thanks to our 18 cold-storage rooms with controlled refrigeration, we can preserve any type of fruits and vegetables under optimal conditions.

In 2013, we acquired and refurbished another warehouse (40,000 square feet) located a stone’s throw from the main one. This facility intended for storing and repackaging produce is equipped with 7 modern repackaging machines and one ice maker. Used in particular for broccolis, the latter allows to distribute ice in a completely hermetic environment without exposing it to external contaminants. 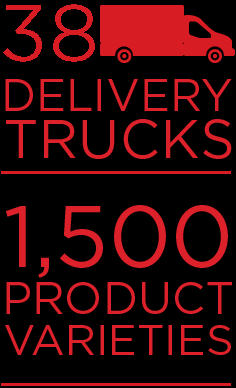 Get in touch with our team
Our nature, our strength